Dear ProAPOD Customer, I want you to know that I have been working the past several months updating ProAPOD Executive 10.0 AND ProAPOD Agent 6.0 and have it ready for you to download. Here’s just a sampling of what we now include.

1. The operating expenses shown in the Rent Scenarios is no longer computed as the percent of GOI for each rent scenario. Instead, the program now looks at the way you entered the operating expenses (i.e., as an actual dollar amount or percent of GOI) and then carries-forward the actual dollar amounts entered and changes only those entered as a percentage of GOI. In other words, costs like property taxes (which are not affected by rents) remains the same in all three scenarios and only things like property management (which are typically affected by rents) are recomputed according to the new GOI created by the scenarios. A great suggestion made by a customer.

2. The Rent Scenarios has also been modified to include a deduction for non-funded upgrades made during the first-year. In other words, when upgrades are made out-of-pocket the result is a lesser cash flow now reflected in the Rent Scenarios analysis with the appropriate returns and measures.

3. Non-funded upgrades made during the first three years are also now reflected as a cash flow deduction in the Monthly Cash Flow report. For example, if you assume an out-of-pocket upgrade in the second month of the second year, the program will deduct that amount from the corresponding cash flow for that month and year.

4. The ability to “step” the vacancy rate for the Proforma Income Statement. Rather than using just one vacancy rate for all ten years, you are now able to make two adjustments to the vacancy rate for your revenue projections. For example, you can now show 15% vacancy in the first year, 10% in the second year, and 5% starting in the third year. This was suggested by a customer who works with “fixer-uppers”.

6. The ability to select your currency symbol. In addition to using a dollar symbol on our forms and reports (our default setting), analysts in different countries now have the option of also selecting a Euro, Pound, Rand or Yen symbol.

7. The ability to select between “passive losses carried forward” (our default setting) and “losses taken currently” for the Proforma Income Statement. This was suggested by a customer who prefers to make revenue projections based upon either method.

1. An entry for property upgrades. This allows you to include an amount for upgrade costs (i.e., painting, carpeting, roofing, and so on) in addition to the property’s operating expenses. This way you can show any one-time cost separate from ongoing costs required to run the property. It is revealed in the APOD, Rent Scenarios, and Proforma Income Statement.

2. A line item in the Proforma Income Statement that shows the investor’s profit after a sale. This was suggested by a customer who typically likes to inform investors what profit they might expect after they sell the property. This was done by deducting the investor’s initial investment plus upgrades from sale proceeds.

3. The operating expense computation in the rent scenarios form and report was modified to change how operating expenses are shown. THIS IS THE SAME AS THE UPDATE FOR EXECUTIVE 10.0 (Executive 10.0, item 1, above).

HOW DO YOU GET THE UPDATE? 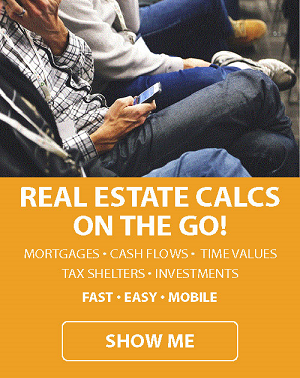